Policy Exchange hosted Mark Carney, UN Special Envoy for Climate Action and Finance, and former Governor of the Bank of England, in conversation with Hon Malcolm Turnbull, former Prime Minister of Australia, in a webinar chaired by Juliet Samuel, Senior Fellow at Policy Exchange and Telegraph columnist. Among other questions, they discussed how to achieve net zero and what the coronavirus crisis can teach us about dealing with climate change. Watch the video on YouTube ‘Everything is different now: the UK economy and the Coronavirus crisis’ was the subject of Policy Exchange’s first public webinar. Our speakers included the main triumvirate who led the policy response to the 2008 economic crisis – Rt Hon Lord Darling of Roulanish, former Chancellor of the Exchequer; Lord King of Lothbury, former Governor of the Bank of England; Lord Macpherson of Earl’s Court, former Permanent Secretary at HM Treasury – as well as Dr Gerard Lyons, newly appointed Senior Fellow at Policy Exchange. The event was chaired by Juliet Samuel, Telegraph columnist and Senior Fellow at Policy Exchange.

The event was covered by The Times, The Daily Telegraph, The Daily Mail, The Guardian and ITV News among other outlets. Policy Exchange’s universities research on front page of The Times

Pupils will receive university offers only after their A-level results, in radical reforms to the admissions system reported on the front page of The Times. The change reflects the key recommendation made in Policy Exchange’s 2019 report Sins of Admission, which noted the disastrous impact unconditional offers can have on individual students and entire cohorts. The Times also cited Policy Exchange’s new paper, Universities at the Crossroads, which warned that universities are losing the nation’s trust. Policy Exchange’s paper also featured in The Daily Mail and in The Guardian under the headline, ‘Universities brace for government scrutiny after Policy Exchange report’. The return of onshore wind

The next round of the Contracts for Difference (CfD) scheme will be inclusive of more forms of renewable energy, including onshore wind, solar and floating offshore wind developments, the Secretary of State for Business, Energy and Industrial Strategy, Rt Hon Alok Sharma MP, announced yesterday. The new policy reflects a key recommendation made in Policy Exchange’s 2015 report, Powering Up: The future of onshore wind in the UK, which argued for the continuing inclusion of new and repowered wind projects under the CfD scheme at a time when the policy of excluding onshore wind from future CfD auction rounds was emerging. “If anyone was to draw up a list of the top twenty most influential think tanks in Westminster, can anyone seriously doubt that Policy Exchange would be at number one?” That’s the verdict of Iain Dale in the LBC presenter’s latest column for Conservative Home. He calls Policy Exchange “the pre-eminent think tank in the Westminster village” and notes our unique convening power, saying: “There are few organisations that could attract power players like Mark Carney and Alan Greenspan, or Dominic Raab and Mike Pompeo to appear on its platforms.” The Sun reported that the Government is considering a Department for the Union to strengthen the bonds between the nations, as recommended in Policy Exchange’s Modernising the United Kingdom paper. This follows the House of Lords Communications and Digital Committee backing Policy Exchange’s proposals to increase the number of sporting events that must be shown on free-to-air TV, for example women’s national football tournaments and test cricket in Public service broadcasting: as vital as ever. Policy Exchange was delighted that the party election manifestos reflected the priorities of our cross-party research since the last general election (and even earlier). Ideas from at least 24 papers were contained in the Conservative, Labour, Liberal Democrat and Green 2019 manifestos – from social care to education, farming to judicial power. Explore the infographic showing which ideas were adopted by the different parties here. 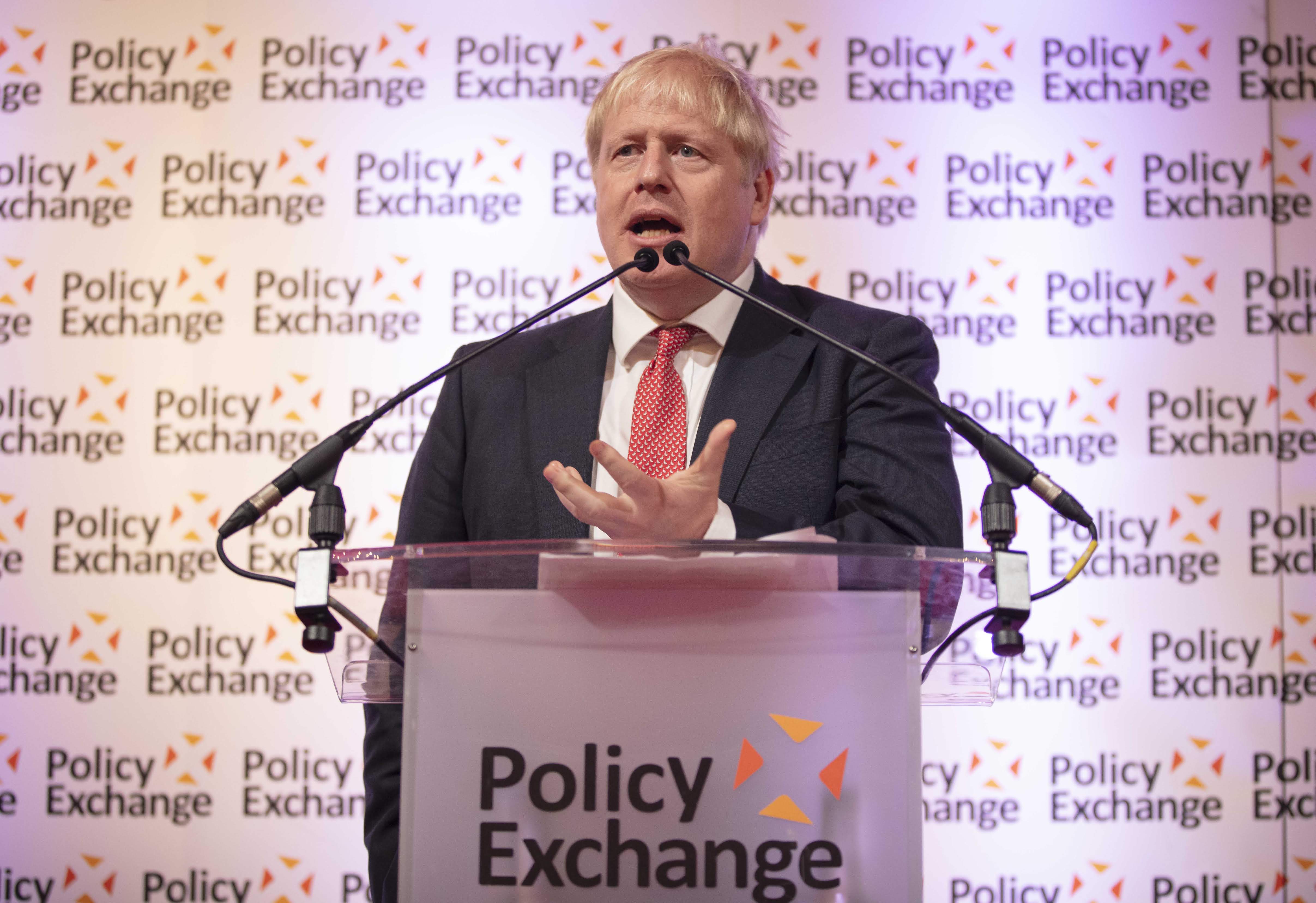 Dean Godson, Director of Policy Exchange, was delighted to welcome the Prime Minister, Rt Hon Boris Johnson MP, to the official launch of the final volume of Charles Moore’s authorised biography of Margaret Thatcher, Herself Alone.

The event, hosted by Policy Exchange, was the Prime Minister’s first visit to a think tank since he took office. It was attended by some of the surviving dramatis personae from the Thatcher era and other senior figures from the world of politics, journalism and public life.

The Prime Minister praised the biography, saying, it is “not just the greatest recent work of biography but… also, in our lifetimes, the greatest work of modern British history”. Charles Moore, the author of the 20-year project, is a Senior Fellow at Policy Exchange and was previously Chairman of the Trustees. Watch the video of the speeches on YouTube The Supreme Court has allowed Gerry Adams’s appeal against his 1975 convictions for escaping from lawful custody. When a court quashes a conviction 45 years later, one might imagine that new evidence must have come to light. Not this time: the case turned on a question of law. The Supreme Court ruled that Mr Adams had not been lawfully detained at all, hence his “escape” was not from lawful custody. As Prof Richard Ekins and Sir Stephen Laws set out, this ruling opens the door for Mr Adams, and for others, to bring proceedings against the government for compensation for false imprisonment. It also poses a very serious challenge to the ordinary functioning of government. A training opportunity in the crisis

The coronavirus crisis underlines the need for an education and training system that is better aligned with the economic and social needs of the UK, says David Goodhart in this research paper. We can no longer afford the luxury of a wasteful mismatch produced by low value degrees and a disorganised approach to vocational training. The current crisis also offers an opportunity to cut through many of the normal blockages and vested interests, not least since we may – in the wake of the coronavirus crisis – be moving into a period of high unemployment, which will require a radical rethinking of current policy. This paper sets out three reforms that would help to improve the UK’s training and education. Legislating for the relaxation of the lockdown

This paper examines what lessons can be learned from the first stage of the coronavirus crisis and applied to legislating for the next stage. The focus will be on the aspects of the legislative response that have had the greatest impact on the largest number of people – the so-called “lockdown” rules. A Border Once Again

Just as the main talks on a permanent Brexit agreement are currently bogged down, the EU had begun to panic that the already agreed Irish Protocol was also stuck in the doldrums. The UK government had thus been under heavy pressure to begin tangible preparations to enact the measures agreed in last December’s revised Protocol. Brussels was demanding border infrastructure, computer systems for customs declarations and an office in Belfast to house EU officials who would oversee the customs measures. The Government is launching an eight-week consultation on decriminalising BBC licence fee evasion, said the Rt Hon Baroness Nicky Morgan, Secretary of State for Digital, Culture, Media and Sport, in a speech at Policy Exchange on the Future of Media and Broadcasting. Watch her speech here. DARPA and the American Approach

Policy Exchange’s Visiting Scholar, Dr William Schneider Jr, delivered a keynote speech on “Delivering National Scientific & Technological Advantage: DARPA and the American Approach”. As a former Chairman of the US Defense Science Board, Dr Schneider is a leading authority on strategic innovation and tech R&D. His wide-ranging speech addressed issues including the evolution of national defence technologies, space security and how to help create high-tech innovation. You can watch a video of the event here and read his paper here.