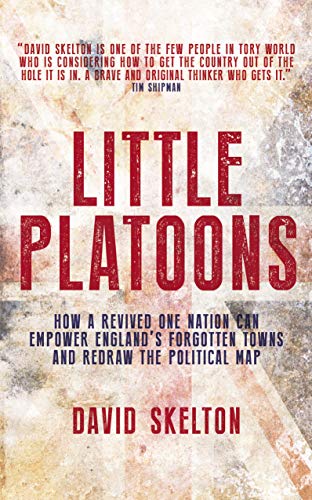 Copies of Little Platoons will be available to purchase during this event.

About the Book
Brexit – a revolutionary moment in British politics. Voters in long-forgotten English towns made their disenchantment clear, overwhelmingly voting to ‘take back control’ from a remote and defective economic system. Despite this decisive message in 2016, the concerns of these forgotten towns have continued to be all but ignored.

David Skelton grew up in Consett, a north-eastern town where the steel industry has deep roots. When the steelworks closed almost forty years ago it lost everything, a story echoed in towns across England. Skelton uses Consett’s experience to discuss what has gone wrong and how we can put it right. He considers a broken social contract and the economic and identity liberalism which has neglected the needs of a great bulk of the population.

Little Platoons calls for a revival of One Nation to recognise the needs of people in such towns. It argues that a brave Tory Party can shatter decades-old boundaries and redraw the political map by marrying social reform with private enterprise, enhancing community values and allowing long-ignored voters to genuinely take back control.

About the Author
David Skelton has been a highly influential figure in politics, policy development and public service reform for over a decade. He was head of research at Policy Exchange between 2011 and 2013, and went on to found Renewal, with the aim of broadening the appeal of the Conservative Party and pushing the policy concerns of the ‘left-behind’. Skelton has written regularly for a number of publications, including The Guardian, New Statesman, Daily Telegraph, Prospect, Conservative Home and The Spectator, as well as appearing regularly on BBC Radio and TV, ITN and Sky News.