One of the more prominent, if somewhat hazy, criticisms of increasing use of interconnectors to help the UK overcome its electricity market problems, is that ‘we won’t be able to rely on them when we really need them’. The implication being, they’re fine most of the time, but if we have a crisis, either dastardly foreigners might choose not to sell to us, or simultaneously crisis-stricken foreigners might be unable to. It makes for an alarming conversation-starter. But to draw useful conclusions, we need to drill down a little deeper, both to work out what the scenario is that we’re worried about, and to work out how we might respond. 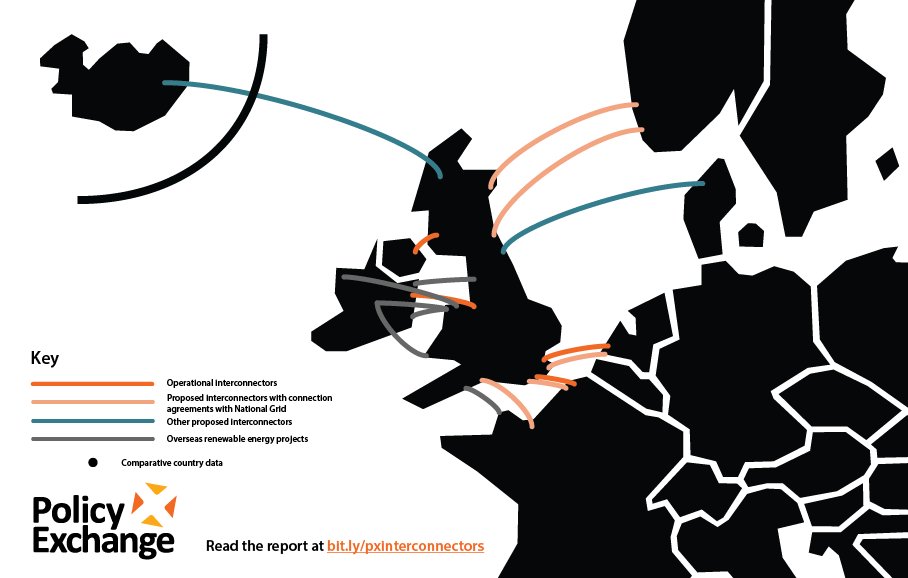 In general terms the reliability record of interconnectors is excellent. The International Conference on Large Electric Systems (CIGRÉ) surveyed the physical reliability of 35 HVDC interconnectors. Only one of the 35 surveyed lines was unavailable unscheduled for more than 10% of the time, with average availability of 91%. In assessing GB system security, Ofgem uses the following assumptions for different generating technologies. Interconnectors perform better than most alternatives, and should not be discounted on the basis of physical characteristics.

In ordinary conditions, interconnectors are a good way to achieve the oft-sought goal in energy policy of diversification of supply. They can do this in a number of different ways. They can provide geographic diversification, bringing in power from several countries, and connecting it to varied points around the British electricity grid. They can provide economic diversification, with each interconnector operator supplying according to the price dynamics between the two countries it links together. And they can provide a technological diversification (in which diversification of weather patterns is becoming increasingly important), as they join up markets which have made different technology choices, or which have the natural resources to supply electricity generated in different ways. Day-to-day dependability shouldn’t be the concern, then. But what about at the most sensitive times, when the market is ‘stressed’ (to use the jargon) – i.e. demand is close to exceeding supply for electricity.

There is a very unusual scenario in which interconnectors may not be actively beneficial in enabling security of supply. That is when the markets at both ends of the cable simultaneously experience stress events. Even here, a greater amount of interconnection can be helpful – if one cable is neutralised by problems at the other end, links to third markets can help plug the gap. But individual interconnectors may face difficulties. Let’s consider the scenario in its simplest form. Suppose there are two markets linked together by an interconnector – let’s call them Britain and France. For the sake of this simplified version of events, let’s assume that neither is connected to any other markets. Both Britain and France simultaneously suffer system stress events. Each market is short of the amount of generation needed to keep the system in balance. The capacity of the interconnector between the two would supply enough power to keep one or the other from having brownouts. But there isn’t enough generation capacity available in both put together to meet demand in both put together.

How would you try to deal with this? There’s no perfect solution. There would be curtailments somewhere whichever way the interconnector flowed. Only where those brownouts occur could be affected. In theory, pricing offers the best answer to the problem. Whichever market values not having brownouts highest would pay the other to export power through the interconnector. If Britain wanted the electricity enough, it would offer a price at which France was willing to sell. This is essentially the principle behind the EU’s Target Model, which says interconnector flows must follow price differentials. With the market allowed to function, supplies would be allocated where the demand is greatest.

However, in the real world, a combination of the explicit rules that govern transmission networks and implicit political pressure might prevent French companies exporting power, however high the price signal. “I can’t see the theory working,” Dan Roberts from Frontier Economics told me in an email. “It would require the market to be capable of communicating which country had the highest Value of Lost Load (VoLL), and I think that administrative arrangements for VoLL (be that a price cap, or an ex ante estimate of VoLL in recognition that the market has ceased to function efficiently and signal value properly) would kick in. So you are down to what happens between the TSOs as the driving factor until the system stress passes.” Some system operators have bilateral agreements over what happens on their interconnector in various emergency situations, including National Grid and RTE over the IFA interconnector between Britain and France. Other routes, including BritNed, do not appear to have such rules.*

Given the apparent collision between the EU Target Model and real-world practices in serious simultaneous emergency situations, should the UK be worried, and should it change the way policy deals with interconnectors?

The UK has adopted a capacity market to provide insurance against supply shortfalls. The government is currently trying to work out how to bring interconnectors (or overseas generators connected through interconnectors, as we recommend in our recent report, Getting Interconnected) into the capacity market. In most cases where the UK is short of power, interconnectors are helpful in providing back-up support. Moreover, the more connections you have to different countries, the more robust the overall system is. If, for example, France and the UK are simultaneously in stress, links between the UK and Norway, or between France and Germany will be valuable. Diversification, as so often, improves security of supply. But interconnectors won’t be able to play these roles if they don’t get built. And a situation in which a capacity market is running but interconnectors are excluded creates the worst possible investment environment for them, by lowering prices at market peaks and subsidising their competitors at all other times.

Nonetheless, simultaneous stress events could create a situation that interconnector operators (or overseas generators) can’t control. This would hinder their ability to fulfil the obligations attendant on them if they enter the capacity market. Interconnectors (or overseas generators), not politicians, should be the ones to weigh whether the risk of being prevented from supplying electricity to Britain during a stress event, and the colossal fines that entails, are worth the reward of extra capacity payments. They certainly shouldn’t be excluded from the capacity market, but they will need to take decisions on whether they can provide the services it will be paying for.

If interconnectors are excluded or severely discounted from capacity assessments, it just creates another risk; that customers will end up being forced to pay more for greater volumes of domestic capacity at higher prices. In other words, the risk is that bills are higher than they need to be. This week, DECC, Ofgem and National Grid have all published reports on capacity margins, as the design for the capacity market is being finalised. While the National Grid report accepts that ”significant imports are possible” and even “likely”, it ultimately recommends that because they cannot be guaranteed, more domestic capacity should be procured in the capacity market. The Panel of Experts convened to oversee the Electricity Market Reform proposals found this to be based on “quite thin evidence”, and instead proposes that interconnectors should be expected to deliver imports to GB of at least 50% of their capacity.

With all policy about capacity margins, it is ultimately a question of how much insurance – how much security of supply – to buy. There is already considerable doubt over whether the costs of the capacity market reflect consumers’ views of the value of lost load. But politicians, fearful of the consequences for their careers of power shortages may be more inclined to buy backup capacity than customers would be were their willingness to pay be put to the test. The creation of a capacity market already shows that politicians no longer trust the price signal in an energy only market to provide sufficient incentive to build capacity. There will always be a political incentive to buy just a bit more capacity, for politicians and officials to be a bit more sure about their job security. This is a bad enough deal for consumers, without making it worse by excluding and discouraging one of the most cost-effective options both for provision of capacity at times of emergency, but also for provision of cheap low-carbon electricity at all other times.

* This is a pretty murky area.